Day trip from Fes to Chefchaouen

Private day trip from Fes to Meknes and Volubilis

4-Day tour from Fes to Merzouga and Marrakech

5-Day desert tour from Fes to Erg Chebbi and Marrakech

Highlights for Fes excursion with hotel pick up :

Take in the city’s most iconic sites: a 14th-century madrasa, the gorgeous Karaouyine and Andalucia mosques and the vivid workshops of the tanners’ district. Pass beneath the stunning Bab Boujloud gate and take in sweeping views from the ruined, hilltop tombs of the 13th-century Merenid Sultans.

Private Tours Morocco travel company organise Fes day trip available every day. Our guide will you at your hotel or riad in Fes before beginning your guided tour of the medina - one of the world’s largest walled in cities. You will explore the narrow streets lined with fresh fruit, mounds of spices, intricately woven Berber carpets and many other art objects of Morocco. You will visit Mosques including the Quaraouiyine Mosque founded in 859 by Fatima el Fihri and the Andalusian Mosque dating back to 860 and fountains , Medersas founded as early as the 13th century before having a break for lunch .

After you will visit Batha Palace , Chouwara Tanneries, Souks, Bab Boujloud - with its green and blue ceramics, Mellah and the 17th century Ibn Danan synagogue as well as the Kings Palace, the Merindes Tops & Borj North & south and a Ceramic factory before being dropped off back at your hotel or riad. 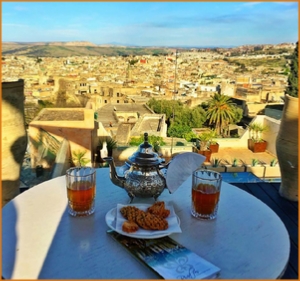 Contact us for actual price and availability for Fes day trip on your selected travel date.

Our pricing for all of our tours in Morocco are continually updated to guarantee that you always receive the greatest deal.

Lunch, soft drinks, gratuities, and admission costs are not included.